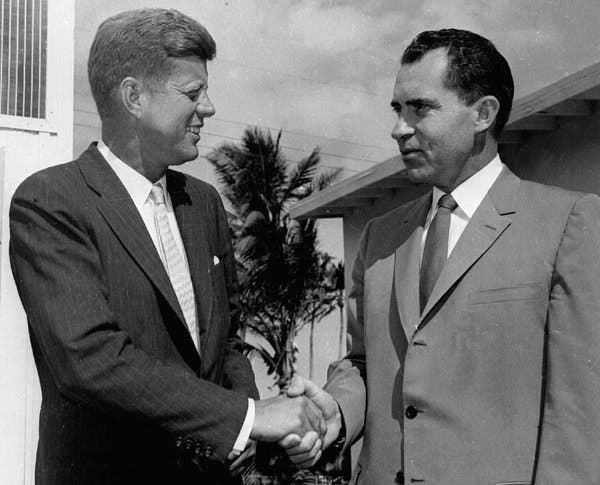 “You gotta swallow this one,” says a Republican hack in Oliver Stone’s Nixon, referring to the 1960 election, in which John F. Kennedy prevailed. “They stole it fair and square.”

That Richard Nixon was cheated out of the presidency in 1960 has become almost an accepted fact. You’ve probably heard the allegations: Kennedy’s operatives fixed the tallies in Texas and Illinois, giving him those states’$2 51 electoral votes and a majority in the Electoral College. Fearing that to question the results would harm the country, Nixon checked his pride and declined to mount a challenge.

The story is rich in irony: The much-hated Nixon, later driven from the presidency for cheating in an election, puts country before personal gain. The beloved Kennedy, waltzing through life, pulls off the political crime of the century. Nixon’s defenders like the story because it diminishes Watergate. His detractors like it since it allows them to appear less than knee-jerk—magnanimously crediting Nixon with noble behavior while eluding charges of Kennedy worship.

The race was indeed close—the closest of the century. Kennedy received only 113,000 votes more than Nixon out of the 68 million ballots cast. His 303-219 electoral-vote margin obscured the fact that many states besides Texas and Illinois could have gone either way. California’s 32 electoral votes, for example, originally fell into Kennedy’s column, but Nixon claimed them on Nov. 17 after absentee ballots were added.

Even before Election Day, rumors circulated about fraud, especially in Chicago, where Mayor Richard Daley’s machine was known for delivering whopping Democratic tallies by fair means and foul. When it became clear how narrowly Nixon lost, outraged Republicans grew convinced that cheating had tipped the election and lobbied for an investigation.

Nixon always insisted that others, including President Eisenhower, encouraged him to dispute the outcome but that he refused. A challenge, he told others, would cause a “constitutional crisis,” hurt America in the eyes of the world, and “tear the country apart.” Besides, he added, pursuing the claims would mean “charges of ‘sore loser’ would follow me through history and remove any possibility of a further political career.”

Classic Nixon: “Others” urge him to follow a less admirable course, but he spurns their advice for the high road. (William Safire once noted that he always used to tell Nixon to take the easy path so that Nixon could say in his speeches, “Others will say we should take the easy course, but …”) Apart from the suspect neatness of this account, however, there are reasons to doubt its veracity.

First, Eisenhower quickly withdrew his support for a challenge, making it hard for Nixon to go forward. According to Nixon’s friend Ralph De Toledano, a conservative journalist, Nixon knew Ike’s position yet claimed anyway that he, not the president, was the one advocating restraint. “This was the first time I ever caught Nixon in a lie,” Toledano recalled.

More to the point, while Nixon publicly pooh-poohed a challenge, his allies did dispute the results—aggressively. The New York Herald Tribune’s Earl Mazo, a friend and biographer of Nixon’s, recounted a dozen-odd fishy incidents alleged by Republicans in Illinois and Texas. Largely due to Mazo’s reporting, the charges gained wide acceptance.

But it wasn’t just Mazo who made a stink. The press went into a brief frenzy in the weeks after the election. Most important, the Republican Party made a veritable crusade of undoing the results. Even if they ultimately failed, party leaders figured, they could taint Kennedy’s victory, claim he had no mandate for his agenda, galvanize the rank and file, and have a winning issue for upcoming elections.

The Republicans pressed their case doggedly. They succeeded in obtaining recounts, empanelling grand juries, and involving U.S. attorneys and the FBI. Appeals were heard, claims evaluated, evidence weighed. The New York Times considered the charges in a Nov. 26 editorial. (Its bold verdict: “It is now imperative that the results in each state be definitively settled by the time the electoral college meets.”)

The results of it all were meager.

New Jersey was typical. The GOP obtained court orders for recounts in five counties, but by Dec. 1 the state Republican committee conceded that the recounts had failed to uncover any significant discrepancies, and they halted the process. Kennedy was certified the state’s official winner by 22,091 votes. Other states’ recount bids and investigations similarly petered out.

Texas and Illinois, the two largest states under dispute, witnessed the nastiest fights. In Texas, where Kennedy won the 24 electoral votes by a margin of 46,000 ballots, the GOP took to the courts. But its suits were thrown out by a federal judge who claimed he had no jurisdiction. In Illinois, the appeal was pursued more vigorously, maybe because the electoral take was higher (27) and Kennedy’s margin slimmer (9,000 votes). Charges focused on Cook County (specifically Chicago) where Kennedy had won by a suspiciously overwhelming 450,000 votes.

National GOP officials plunged in. Thruston Morton flew to Chicago to confer with Illinois Republican leaders on strategy, while party Treasurer Meade Alcorn announced Nixon would win the state. With Nixon distancing himself from the effort, the Cook County state’s attorney, Benjamin Adamowski, stepped forward to lead the challenge. A Daley antagonist and potential rival for the mayoralty, Adamowski had lost his job to a Democrat by 25,000 votes. The closeness of his defeat entitled him to a recount, which began Nov. 29.

Completed Dec. 9, the recount of 863 precincts showed that the original tally had undercounted Nixon’s (and Adamowski’s) votes, but only by 943, far from the 4,500 needed to alter the results. In fact, in 40 percent of the rechecked precincts, Nixon’s vote was overcounted. Displeased, the Republicans took the case to federal court, only to have a judge dismiss the suits. Still undeterred, they turned to the State Board of Elections, which was composed of four Republicans, including the governor, and one Democrat. Yet the state board, too, unanimously rejected the petition, citing the GOP’s failure to provide even a single affidavit on its behalf. The national party finally backed off after Dec. 19, when the nation’s Electoral College certified Kennedy as the new president—but even then local Republicans wouldn’t accept the Illinois results.

A recount did wind up changing the winner in one state: Hawaii. On Dec. 28, a circuit court judge ruled that the state—originally called Kennedy’s but awarded to Nixon after auditing errors emerged—belonged to Kennedy after all. Nixon’s net gain: -3 electoral votes.

The GOP’s failure to prove fraud doesn’t mean, of course, that the election was clean. That question remains unsolved and unsolvable. But what’s typically left out of the legend is that multiple election boards saw no reason to overturn the results. Neither did state or federal judges. Neither did an Illinois special prosecutor in 1961. And neither have academic inquiries into the Illinois case (both a 1961 study by three University of Chicago professors and more recent research by political scientist Edmund Kallina concluded that whatever fraud existed wasn’t substantial enough to alter the election).

On the other hand, some fraud clearly occurred in Cook County. At least three people were sent to jail for election-related crimes, and 677 others were indicted before being acquitted by Judge John M. Karns, a Daley crony. Many of the allegations involved practices that wouldn’t be detected by a recount, leading the conservative Chicago Tribune, among others, to conclude that “once an election has been stolen in Cook County, it stays stolen.” What’s more, according to journalist Seymour Hersh, a former Justice Department prosecutor who heard tapes of FBI wiretaps from the period believed that Illinois was rightfully Nixon’s. Hersh also has written that J. Edgar Hoover believed Nixon actually won the presidency but in deciding to follow normal procedures and refer the FBI’s findings to the attorney general—as of Jan. 20, 1961, Robert F. Kennedy—he effectively buried the case.

Another man, too, believed Nixon was robbed: Nixon. At a 1960 Christmas party, he was heard greeting guests, “We won but they stole it from us.” Nixon nursed the grudge for years, and when he was criticized for his Watergate crimes he would cite the Kennedys’ misdeeds as precedent. He may have felt JFK’s supposed theft entitled him to cheat in 1972. It’s an interesting hypothetical: If no pall had been cast over the 1960 election, would Watergate have happened?