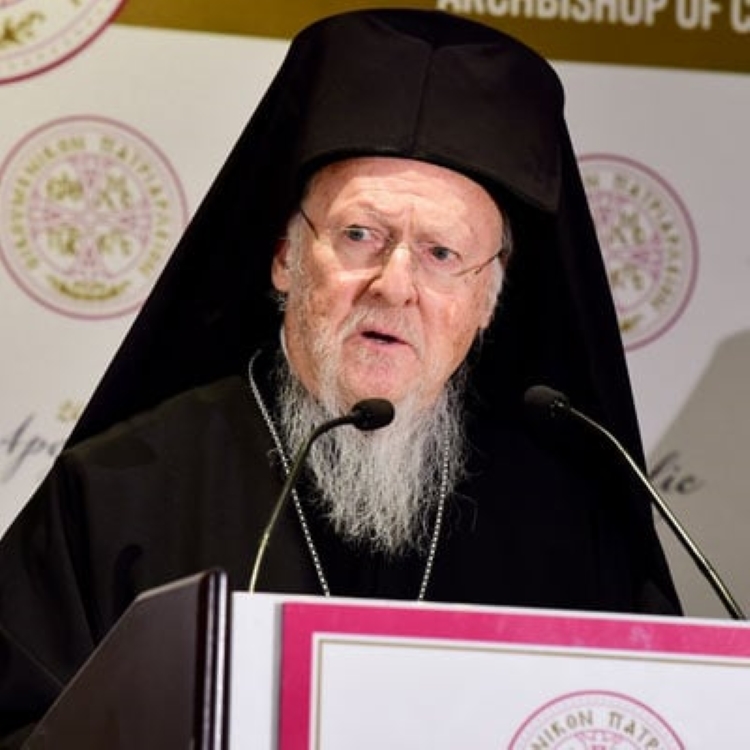 I have noted many times the contrarian, anti-Christian, personality of Pat. Bartholomew and I recently have said that when he has a choice (and he almost always has) between continuing a fight on the one side and love and reconciliation on the other, he always picks to fight… I wrote recently that throughout his tenure he displayed the demeanor and the personality of an obstinate mule from his home island of Imvros – and then I was thinking that maybe I took the argument a little too far and I exaggerated… Yet, every time I try to “correct myself” the “leaders” I have described in very dark words come back to verify me with their own words and actions.

Such is the case with Pat. Bartholomew, who yesterday repeated his unnecessarily divisive comments against the Moscow Patriarchate and our brothers in Christ, the Russian Orthodox faithful. This time he went one step lower and used “street-level” language – completely inappropriate for any leader, especially the supposed leader of Orthodox Christianity.  He used the Greek expression “Σκασίλα μου”, referring to the fact that his actions in granting autocephaly to the 20% of Ukrainian Orthodox caused a “Schism” and the Russian Church does not commemorate his name in services.

Instead of expressing his Christian love for his Russian brothers in Christ and his hope that soon a reconciliation process will bring results in order for Orthodoxy to be re-united (and let me note here that the Russian branch of Orthodoxy including the Churches that follow Moscow are probably over 70% of world Orthodox Christianity), he chose instead “Σκασιλα μου” /  “I don’t give a s..t”…

“Skasila mou” is accurately translated, not as some of Bartholomew’s defenders did (“I don’t care” or “What do I care”) because for “I don’t care” there is an exact translation in Greek: “Δεν με νοιάζει”.  If he had said “Δεν με νοιάζει”,  it would probably not attract the attention that it did. In Greek media today there are hundreds and hundreds of posts titled with his inappropriate comment: “Σκασιλα μου”…  Which best translates as “I don’t give a s…t”…  His choice of words reflects not only his Anti-Christian, contrarian personality but his many failures…

“Σκασιλα μου” /  “I don’t give a s..t” – that because of my decisions and actions in Ukraine, neo-Nazis, the descendants of former Nazis among others, are taking away or destroying the Churches of the 70% of the Ukrainian Orthodox who chose to stay under the Moscow Patriarchate.

“Σκασιλα μου” /  “I don’t give a s..t” – that this 70% of Ukrainians who chose to stay under the Moscow Patriarchate are suffering harsher religious freedom suppression than the Patriarchate is suffering under the neo-Ottoman Turks.

“Σκασιλα μου” /  “I don’t give a s..t” that I was specifically warned that my decision about Ukraine would cause violence.  I went ahead anyway because the teachings of Christ mean nothing to me.  I prefer to act as an obstinate mule from Imvros and kick in every direction using my rear legs, than as a descendant of Andrew the First Apostle.

“Σκασιλα μου” /  “I don’t give a s..t” that I caused havoc in Ukraine because I care more about the millions of $$ that I received from America for that purpose (and you Archons and the rest of the faithful will never learn exactly how I received them – unless you investigate former Ukrainian President Poroshenko…).

“Σκασιλα μου” /  “I don’t give a s..t” that I minimized Orthodoxy – one of the four “ecumenical legs of Hellenism”, along with Diaspora, Navigation and Cultural Heritage).  I care more about material indulgence.  My predecessor Pat. Demetrios lived in a small room in the Patriarchate – but I live in a multi-million dollar villa overlooking Vosporos paid for by one of you – the late Alex Spanos. I teach my subordinates, the  “Hierarchs of the Throne”,  to do the same: AB Makarios of Australia bought a $6.5 million apartment overlooking Sydney harbor, and recently, my second-in-command Emmanuel of Chalcedon bought a $1 million house in the glitzy northern suburbs of Athens, and then he stole all the furniture of the Metropolis of France where he used to serve for twenty years to furnish it!! I surely lead by example!!

“Σκασιλα μου” /  “I don’t give a s..t” that I undermine the second ecumenical leg of Hellenism, Diaspora, by instructing the Archbishops of America, Australia, England and Canada to put a lid on any political action against Turkey by the Greek communities under their command.  I am a Turkish citizen, all my hierarchs are Turkish citizens, we have taken an oath of allegiance to Turkey and we all intend to keep it!! I blessed the Turkish troops as they invaded Syria to kill the fighting Kurds and I may even bless them again if they invade any Greek island.  Anyway, the Greek Islands along the coast of Turkey are already under my ecclesiastical jurisdiction and “Σκασιλα μου” /  “I don’t give a s..t”  if either Turkey or Greece has sovereignty over them! 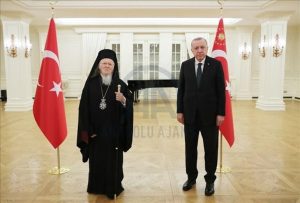 Ecumenical Patriarch: Moscow Patriarchate does not commemorate me, what do I care?

Regarding the attitude of the Moscow Patriarchate, Ecumenical Patriarch Bartholomew spoke of ingratitude. “As you know, in recent years (the first throne) has been tested by an ignorant attitude of the Russian Orthodox Church towards its Mother Church.

We are the Mother Church because we gave them Christianity. We enlightened them. We gave them the Cyrillic alphabet through which we wanted to help them promote their culture. And, as we say in the liturgical language, they turned their back on the benefactor.

They were angry with us because we made the Church of Ukraine autocephalous,” the Ecumenical Patriarch said during an event in New York, which is the last stop on his US apostolic visit.

In this light, after the crisis that arose between Ukraine and Russia, Ecumenical Patriarch Bartholomew responded to the request of the people of Ukraine by granting them autocephaly.

In retaliation, the Moscow Patriarchate decided to stop commemorating the Ecumenical Patriarch. Remaining faithful to the ecclesiastical order and with a sense of responsibility towards history, the Church of Constantinople did not react to this move and continued to regularly commemorate Patriarch Kirill.

“So why not do the same with Ukraine with its 40-50 million inhabitants. Our Ukrainian brothers wanted not only now but also much earlier and now even more intensely to have their own church and not to belong to Moscow, not to depend on Moscow, not to be oppressed by Moscow. T

Message of support to Archbishop Elpidophoros of America

Referring to the honor and the recognition for him by the US side, he noted that they reflected the high prestige enjoyed by the Ecumenical Patriarchate, which was, unfortunately, much larger internationally than inside Turkey, which is its historic headquarters.

Regarding US President Joe Biden, he referred to their friendship but also to the handwritten footnote that the US president added in the last reply letter he sent to him, which said “Be well because we need your leadership.”

The United States is one of the largest and most important provinces of the Ecumenical Throne. Referring to its importance, the Patriarch praised Archbishop Elpidophoros, saying that in a short time he managed to find solutions to the three major problems of the Archdiocese regarding the completion of Saint Nicholas Orthodox Church and National Shrone, the Hellenic College Holy Cross and the Pension Fund for the Clergy.

“After 12 years I have the blessing of God and I have the pleasure of being close to the Greek community in the USA. This time I found a new Archbishop at the head of the Archdiocese. Young in age and young at the beginning of his term.

The Patriarchate has full confidence in Archbishop Elpidophoros and for this reason, we elected him unanimously and sent him to lead as many years as the Lord allows.

We chose him because under the current circumstances we could not find another better and more suitable for this position.

I am glad to see that you embraced him with the same love that he came to you. And the mutual love, trust and vision that you have is the best guarantee for the success of his ministry.”