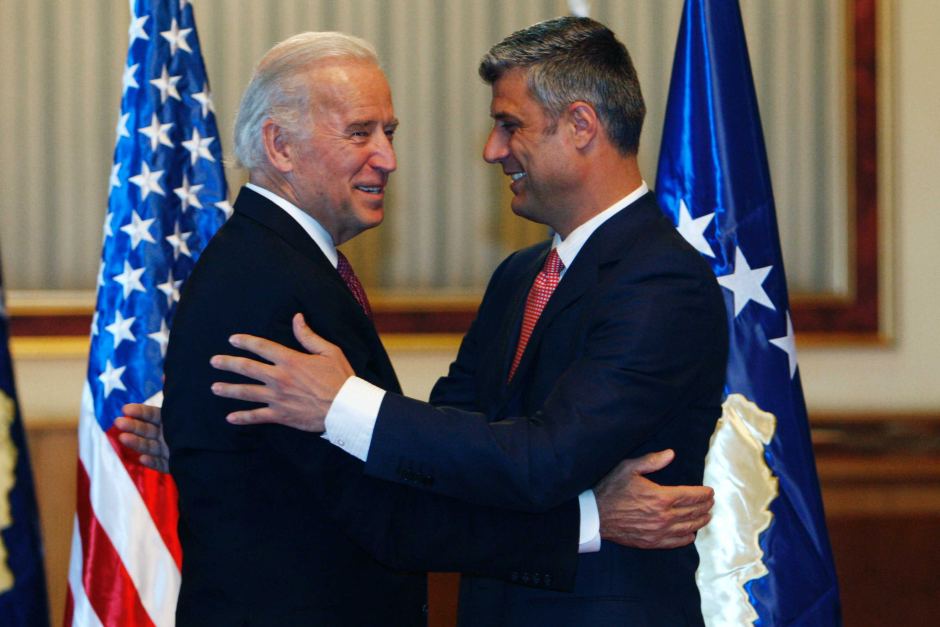 According to the New York Times, Prosecutors accused him and other former fighters of being “criminally responsible for nearly 100 murders.”

The indictment appeared days before the Albanian Muslim Thug would have appeared at the White House with the Globalist Serbian President and President Trump to do a deal on Kosovo on June 27th. Thaci cancelled his trip to the USA last week. Thaci is a ceremonial President of the illegal state of Kosovo. Close to 100 nations recognize Kosovo. Greece and Serbia do not recognize the Kosovo Narco-Criminal state. With good reason, Turkey is trying to illegally push for the recognition of the illegal Turkish military occupied zone on Cyprus as a nation. Slovakia, Spain, Greece, Cyprus and Romania are the only EU states that don’t recognize Kosovo. Russia and China are Serbia’s allies and the main opponents of Kosovo. In recent years, Serbia’s diplomatic corps has switched 15 nations to reverse recognition. In 2018, African nations like Togo, Liberia, Libya, etc. have reversed recognition.

It is criminal to what happened to Milosevic and the Christian people of Serbia in 1999.

The Clintons declared illegal war on Serbia in 1999. They bombed Christian Serbia, while supporting Islamic Jihadists inside the heart of Europe. Islamic Jihadists like Osama Bin Laden fought with Muslim Albanians in Kosovo and Bosnia. Who gave jihadists a foothold in Christian Europe? The Clintons and the Deep State. What about George Soros and the Globalist Elites? Why did Soros fund and support Albanians inside FYROM, Kosovo, and Albania? The Albanian Muslims were the proxy army for the Globalist elite to gain a foothold in Europe. The same group currently sponsoring an illegal civil war, coup, and destabilization inside the USA to destroy President Trump and cancel USA with the use of proxy armies (Islamists, Black Lives Matter, ANTIFA).

Who do you think are funding and organizing the Black Lives Matter and ANTIFA protests across the USA? It is the same group that destabilized Serbia with support and weapons to minority Muslim Albanians, Catholic Croats, and Bosnian Muslims. It’s the Globalist elites.

Kosovo became the center of Albanian organized crime that spread to Greece in the 1990s.

A report by RIEAS(Research Institute for European and American Studies) said a “confidential police report reveals 42 Albanian criminal organizations operate in Greece. It states “3,000 Albanian criminals are active in the transportation and distribution of cannabis and heroin, while 2,500 Albanians are arrested each year in Greece for robberies, thefts and burglaries.” Sources from the Citizen’s Protection Ministry “estimate that 3,000 Albanians who live in Greece (many legally) own AK-47 rifles and unknown quantities of ammunition.”

Serbianna reported in Sept. 2012 that Greek security services are taking a special interest in Albanian extremist groups in Greece, Albania, Kosovo and FYROM, considering them to a threat to social stability. The report stated that incidents involving Albanian smugglers and narcotics showed the ulterior motive of the crimes was to raise capital for Greater Albanian extremist nationalist purposes to annex Greek Epiros to Albania.

According to 2013 Pro News article, organized crime of Albanian origin has gained a solid foothold in Greece and in the event of plans to destabilize the country will be a “mercenary type” factor in order to hurt Greek interests.

Details (Based on estimates by the Hellenic Police basically):

-The so-called Albanian mafia controls about 80% of the retail distribution of heroin in Greece.

-Controls about 50% of both wholesale and retail hashish.

-Controls 90% of the import of illegal portable weapons in the country (Kalashnikov, Makarov, grenades).

-It is estimated that 50% of women’s “trafficking” circuits are controlled by Albanians with almost absolute dominance in the areas of Metaxourgeio, Paraliaki, Athens Center and “offices” of escorts in all major urban centers.

-50% of armed robberies in houses-shops-businesses are committed by Albanians.

– On average, in the last 5 years, about 15 weapons crypts a year have been discovered that belong to Albanians, most of them on the outskirts of Attica, in Epirus and in North-Western Macedonia.

– In Attica, 2 of the 5 total organized cocaine trafficking circuits operate in Albania. One is active in the center and one in the northern suburbs. The rest of the circuits are Greek.

– Also about 30% of illegal gambling clubs in Attica are “protected” by Albanian circuits.

– A growing trend in recent years is the growing involvement of Albanians in forgeries, facilitating the exit of Asian illegal immigrants from the country and false marriages to obtain legal documents from them. (Odd how human trafficking is a big money maker in Greece).

Albanian circuits function as real parastatal mechanisms. They conduct intelligence, counter-espionage operations, have accounting support (escape routes, vehicles, safe houses), usually using women and not only of the same nationality, and act in a coordinated manner in their criminal activities, not impulsively .

Before deciding on an action, they draw up a plan that is discussed among the members and approved by the “heads”. They place great emphasis on collecting information and networking with Greeks who are eligible for financing or potential partners, etc.

The volume of all these “black” funds (several billion per year) produced by these criminal activities are “laundered” with the help of Greeks or bankers, stockbrokers, real estate agents, shopkeepers, etc.

The result is that there is a significant and scattered class of people in Greece who have a direct interest in Albanian organized crime and at the same time are its “conductors” to gather information or interconnect with a variety of political and social networks in the country.

Evidence points how Albanians were involved in lighting fires in 2007.

Greece allowed itself to be taken over by Albanian organized criminal networks in the 1990s after the fall of Communism in Albania and Yugoslavia. PASOK ruled the 1990s and early 2000s. Simitis and Papandreou allowed the borders to be open to Albania and Kosovo criminal gangs. Nothing was done by corrupt Greek authorities to deport thousands of illegal Albanians living in Greece.

It is time to bring law and order inside Greece. Each Greek citizen must be allowed to carry a concealed pistol in public and a shotgun at home. Greece must adopt laws similar to Arizona, USA and Russia that allow law abiding citizens to protect themselves from the criminal elements to either conceal or open carry pistols and own rifles/shotguns. Greece must implement death penalty to empty prisons of Albanian, Greek, and foreign criminals. Where is our Greek ‘Donald Trump’ or ‘Rodrigo Duarte’?

Filipino President Duarte is killing all drug dealers/gangsters in the Philippines. Duarte said that anyone dealing with drugs or engaged in crime has an automatic death sentence.

Will anything come of this? Will Hacim Thaci, leader of the Albanian Narco-Criminal networks, head to prison and face execution?

Thaci is guilty of thousands of innocent deaths of Greeks from Albanian organized crime.

Albania is ruled by George Soros