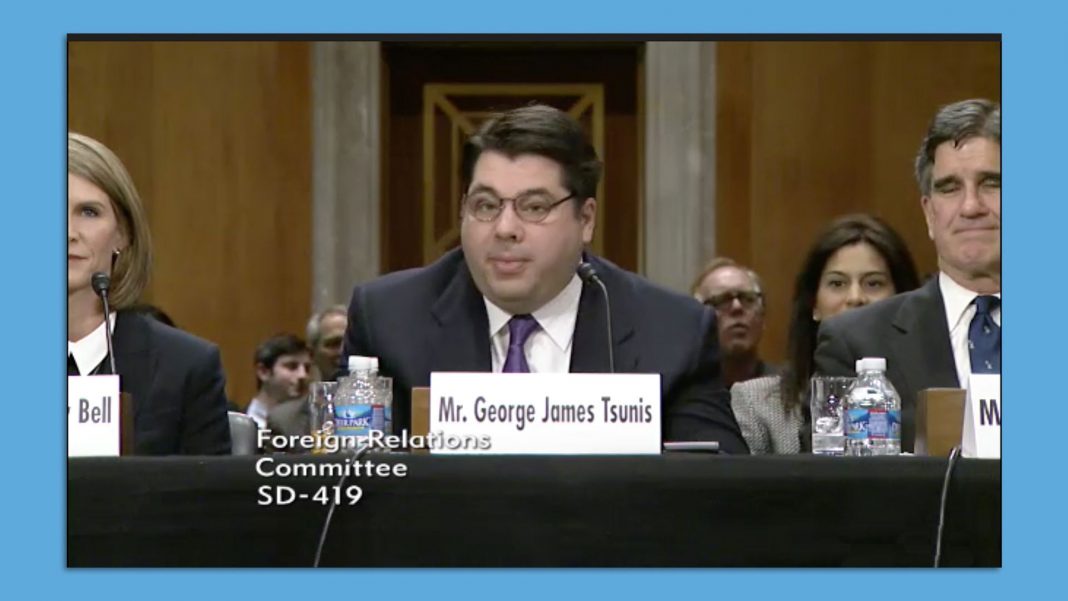 By Nick Stamatakis
It seems that “Karloutsos & Co.” are on the move again… For a while, it was rumored that Karloutsos himself would be appointed ambassador to Greece but it was too far-fetched a proposition and the “father” along with his son was involved in too much legal trouble.  But the “family” needed to “capitalize” on all those years smooching with the Bidens and so they sought another solution.  Enter Senator Menendez, chairman of the powerful Foreign Relations Committee, and voila! The miserable failure of George Tsunis in his infamous nomination hearing (for the ambassadorship to Norway) in the Senate in 2013 suddenly evaporated!
How embarrassing was this 2013 hearing? It was the most embarrassing hearing ever… Tsunis was forced to admit that he had never been to Norway and was unable to answer very basic questions about the region… He quit the nomination almost instantly…
But now they want to try again with the same clueless guy, George Tsunis, who, because he has given a ton of money over the years to Biden he is thought to deserve to become Ambassador to Greece.
Kalroutsos and Co. have to spare the Greek-American community one more embarrassment.  Tsunis is totally unable to handle any issue in foreign relations and Greece is at the most important geopolitical region on the planet with many issues burning from American bases to oil exploration to disputes with Turkey to instability in the Balkans and a number of hotspots nearby: Libya, Syria, Cyprus, Egypt, and Israel… Not to mention Ukraine and Russia in the immediate vicinity.  No president and no Senator in their right mind would send Tsunis to Greece…
But Biden as we all know is not in his right mind for a couple of years now – if he ever was… And in the DC swamp, where the only qualification that really matters is money, everything is possible…
Still, the odds are that Tsunis will embarrass himself and all of us one more time and he needs to stay out of this…
Those interested to see how BIG was the embarrassment in 2013 take a look below:

BELOW THE NEWS BY AXIOS

Why it matters: As chairman of the Senate Foreign Relations Committee, Menendez has the ability to slow-walk any ambassadorial nominee, giving the White House plenty of reasons to placate him on one specific candidate. Tsunis has a checkered political history, though.

What they’re saying: “I have a longstanding policy on not commenting on anyone who may, or may not, become a nominee,” Menendez told Axios.

The intrigue: Tsunis is the founder and CEO of Chartwell Hotels. He has long been a Biden donor and even indicated he’d support him in 2016, when the then-vice president ultimately decided not to run.

Between the lines: Biden plans to draw mostly on political allies and former aides for his first slate of political ambassadors, and it’s unclear how many pure donors will make the initial cut.

Be smart: After his disastrous hearing, Tsunis made inroads with some senators, who appreciated his willingness to listen and learn.