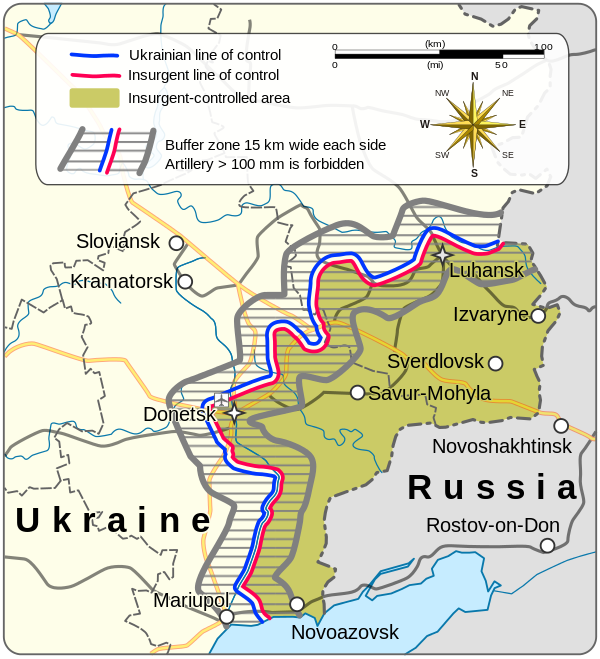 EDITOR’S NOTE (Nick Stamatakis): The truth about the Putin-Biden summit starts to come out now that the dust settled… It was already clear that a deal was done – by the fact that the CIA head and the #3 at the State Dept (Victoria Nuland) had face-to-face talks with Putin in Moscow during in October.  What’s the deal? The Eastern Ukraine Region bordering Russia, which is mostly Russophone (and it is also the home of many thousands of Pontian and other Greeks) will be “autonomous” and will hold local elections, very much as it was decided by the Minsk accords.  Today Biden was supposed to speak to Ukrainian President Zelensky on this issue…

The news first came out from Russian sources such as Sputnik (below) and Tass Agency – and this is why we at Helleniscope are first looking to Russian sources for the news… Western news agencies, as usual, will come out a bit later…

Residents of the eastern Ukrainian regions of Donetsk and Lugansk began demanding greater autonomy and independence from Ukraine in the spring of 2014, in the aftermath of a Western-backed coup in Kiev. Ukrainian authorities responded with military force, sparking a deadly civil war which has killed tens of thousands and displaced millions more.

The Biden administration plans to put pressure on the Ukrainian government to cede autonomy to the breakaway Donbass territories, the Associated Press has reported, citing anonymous officials.

If implemented, the move would be a step toward ending the seven-and-a-half year old civil conflict in eastern Ukraine, and bringing Kiev into line with its obligations under the 2015 Minsk Accords, which committed Ukrainian authorities and the Donbass militias to take measures to halt the fighting and take diplomatic steps to assure peace.

The Minsk protocols provided a mechanism through which Kiev could formally restore control over Donetsk and Lugansk, while providing the latter with constitutionally-guaranteed autonomy status. While some of the agreements’ provisions – particularly measures to halt full-scale war, have been implemented (despite regular violations), the autonomy status provision has yet to be put in place amid resistance from Ukrainian authorities and the country’s parliament.

After coming to power in 2019, Ukrainian President Volodymyr Zelensky initially expressed support for the so-called ‘Steinmeier formula’, named after former German Foreign Minister and Minsk negotiator Frank-Walter Steinmeier, which proposed local elections in Donetsk and Lugansk subject to the Organisation for Security and Cooperation in Europe, followed by the creation of a special self-governing status for these territories under Ukrainian jurisdiction. Zelensky’s endorsement for the Steinmeier formula sparked protests in Kiev by supporters of a hard line on Donbass, prompting him to relent and for the peace process to stall amid fears by pro-Western politicians that autonomy could frustrate Kiev’s plans to join the European Union and NATO.

In the spring of 2021, and again in recent months, tensions over Ukraine have escalated amid back-and-forth claims of troop buildups, with Donbass leaders and Russia – a guarantor of the Minsk deal, expressing fears that Kiev may try to resolve the Donbass impasse by force. Ukraine and its Western patrons, meanwhile, have accused Moscow of concentrating troops on the border for a possible invasion of Ukraine. Russian officials have vocally denied these claims as baseless propaganda.

The Biden administration has promised Kiev “unwavering support,” and has provided the country lethal weapons, military supplies and training by US and NATO personnel. At the same time, US officials have sought to cool the Ukrainian government’s aspirations to join NATO, recently telling Kiev that membership will remain off the table over the next decade, according to one official familiar with the conversations cited by the AP.

Biden is expected to speak to Zelensky on Thursday, two days after his video call with Russian President Vladimir Putin on Tuesday, in which Ukraine was reportedly a central topic of discussion.

The conflict in eastern Ukraine began in the spring of 2014, when, after a coup d’etat in Kiev saw pro-Western, ultranationalist, US and EU-backed protesters overthrow the country’s elected president and set a course for integration with the West. In March, the majority ethnic Russian region of Crimea – which had been part of Russia until it was handed over to Soviet Ukraine by Nikita Khrushchev in 1956, voted in a referendum to break off from Ukraine and rejoin Russia. In April 2014, officials and residents in Donetsk and Lugansk began demanding greater autonomy or even independence from the coup-installed Ukrainian government, with autonomy demands threatening to spread to major eastern Ukrainian regions and cities, including Kharkiv, Mykolaiv and Odessa. Kiev responded by sending troops to crush the Donbass resistance, sparking a bloody civil war which killed as many as 31,000 people and prompted nearly 2.5 million residents to flee their homes (with nearly a million of them accepted in Russia as refugees).