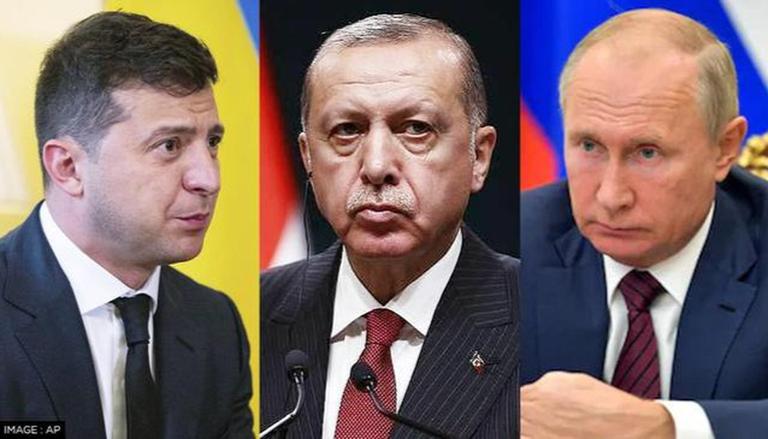 EDITOR’S NOTE: A top-rated analysis by Pepe Escobar based on very recent developments. First, Erdogan in the meeting with Zelensky in Kyiv this week pushed mostly the Russian agenda: Peace through talks between Russia and Ukraine that he can host, keeping the Minsk agreements. Second, as the talented reader of tea leaves that Erdogan is, he smells the swing of international power towards Eurasia and he is positioning Turkey as a possible regional power…  Pepe Escobar very aptly uses the terms “sultan” and “swing” to remind us of an old hit by the Dire Straights… Enjoy it at the end of this post…

This article first appeared in cradle.com, then in thesaker.is and unz.com

Erdogan in Kiev, Putin in Beijing: can neo-Ottomanism fit into Greater Eurasia?

As the world turns further over monumental announcements from the Putin-Xi summit in Beijing, Turkey’s Erdogan keeps walking a thinning tightrope between NATO and Eurasia.  Crossposted with The Cradle.

The Chinese year of the Black Water Tiger started with a big bang – a live Beijing summit between Russian President Vladimir Putin and his Chinese counterpart Xi Jinping – and a minor bang – Turkish President Recep Tayyip Erdogan in Kiev, Ukraine. And yes, it’s all interlinked.

Kremlin foreign policy adviser Yuri Ushakov had revealed in advance that Putin-Xi would release a very important “joint statement on international relations entering a new era,” with Russia and China in synch “on the most important world problems, including security issues.”

Foreign Ministers Sergey Lavrov and Wang Yi, who worked non-stop prior to the summit, met the day before in Beijing to finalize the joint statement. Wang stressed the increasing interconnection of the Belt and Road Initiative (BRI) with the Eurasia Economic Union (EAEU), and much to the interest of the Global South, referred to extensive discussions on BRICS cooperation, Ukraine, Afghanistan, and the Korean Peninsula.

The Russia-China joint statement (here, in Russian) did not cut any corners. The two global powers, among the summit’s key takeaways, are against NATO expansion; favor the UN and “justice in international relations;” will fight “interference in the internal affairs of sovereign countries;” oppose “external forces” undermining national security; and are resolutely against color revolutions.

A Putin Op-Ed published by Xinhua detailed the full spectrum of the Sino-Russian discussions at the highest level – from the drive to “strengthen the central coordinating role of the United Nations in global affairs and to prevent the international legal system, with the UN Charter at its center, from being eroded,” to “consistently expanding the practice of settlements in national currencies and creating mechanisms to offset the negative impact of unilateral [US] sanctions.”

Putin resolutely defined China as “our strategic partner in the international arena,” and stressed how he and Xi “hold largely the same views on addressing the world’s problems.”

He said this strategic partnership is “sustainable, intrinsically valuable, not affected by the political climate and not aimed against anyone. It is underpinned by respect, regard for each other’s core interests, adherence to international law and the UN Charter.”

The Global South – and possibly swathes of Europe, now facing a frigid winter with hiked fuel prices because of the stand off over Ukraine – will not fail to compare it with NATO’s worldview.

Meanwhile, in Kiev, Erdogan and Zelensky were reviewing the Turkish-Ukrainian strategic partnership.

Erdogan did perform quite a feat in Kiev. He called for “a “peaceful and diplomatic solution” in Ukraine, not exactly following the relentless War Inc. narrative. He even said the solution should be found “within the framework of the Minsk agreements, on the basis of Ukraine’s territorial integrity and international law.”

That happens to exactly tie in with Moscow’s view. Kremlin spokesman Dmitry Peskov had previously commented, “if Turkey could encourage Kiev to implement the Minsk deal, Moscow would welcome this development.”

So enter Erdogan as benign messenger/peacemaker – the latest twist in the fascinating, never-ending saga of what could be interpreted as his search for a more refined post-neo-Ottomanism stance in foreign policy.

Well, it’s not that simple. Erdogan, even before landing in Kiev, affirmed that Ankara is ready to host a live Putin-Zelensky meeting or even “talks at the technical level.”

That was his cue to promote a possible Putin jaunt to Ankara after his meeting with Xi in Beijing: “Mr. Putin told us that he will visit Turkey after his visit to China.”

Erdogan did invite Putin in late January. The Kremlin confirms no date has been set yet.

The ostensible purpose of Erdogan’s visit to Kiev, part of a High-Level Strategic Council, was to sign a so-called New Generation Free Trade Agreement, including the very tricky – for Moscow – joint production of Bayraktar drones, manufactured by Baykar Makina, a company owned by none other than Erdogan’s son-in-law Selcuk Bayraktar.

Yes, in Erdoganistan it’s all in the family. And the problem is that the Bayraktar TBT 2 combat drone – like those sold to Ukraine since 2018 – will continue to be used against the civilian population of Donetsk. Lavrov and even Putin himself have been very vocal about it vis-a-vis Ankara.

Erdogan’s geopolitical tightrope walking includes Russian S-400s in and US F-35s out, receiving Russian gas and nuclear technology while selling those Bayraktars to Russia’s enemies, and even the support, expressed by Turkish Defense Minister Hulusi Akar in late January, to the 1936 Montreux Convention, which is very specific on restricting NATO in the Black Sea: “It is out of the question to give up on [Montreux] under today’s conditions.”

Up to now, Erdogan and his Justice and Development Party (AKP) had been actively ditching Montreux to the benefit of the still far-fetched Canal Istanbul linking the Mediterranean to the Black Sea, “entirely under Turkey’s sovereignty,” according to Erdogan – obviously a very juicy deal from NATO’s point of view. Yet the fact is Ankara, mired in an economic/financial swamp, has no means to build the Canal.

The geopolitical tightrope walking still leaves in the balance the real objectives of the Organization of Turkic States (OTS), formerly Turkic Council, which crystallizes the pull of pan-Turkism – or pan-Turanism. It has already gone beyond last year’s Susha Declaration, which solidified a Turk-Azeri “one nation, two states;” it now encompasses these two plus Kazakhstan, Uzbekistan and Kyrgyzstan, and has been actively courting Hungary, Afghanistan, Turkmenistan and – last but not least – Ukraine.

The OTS met in a tightly secured island in Istanbul last November. They discussed in detail the fact that the extremely complex political environment in Taliban Afghanistan might spill over new instances of terrorism and uncontrolled migration. There were no leaks about future, practical OTS steps.

Way more than a bridge connecting Asia Minor and the Caucasus to Central Asia, or a sort of benign form of “dialogue” between the south Caucasus and Central Asia, the OTS, in theory, carries all the trappings of a bloc from the Black Sea to Xinjiang, under a not-too-disguised Turkish hegemony, which implies a serious Trojan Horse element: a NATO presence.

It remains to be seen how the OTS would interface with the Shanghai Cooperation Organization (SCO), which congregates the “stans” as full members, as well as Iran – but not Turkey, which is just an observer. The SCO top powers are of course Russia and China, which in no way would allow, for instance, the Caspian to be open to western predatory policies, infringement of Russian and Iranian spheres of influence, and most of all a ‘security’ bloc with NATO ‘leading from behind.’

The talk in those palace corridors

It’s quite enlightening to assess how Erdogan media – over 90% fully controlled across Turkey – mirrors what may be the real calculations swirling in the corridors of that 1000-room Sultanesque palace in Ankara.

They see that Russia “invaded Crimea, and annexed eastern Ukraine,” and is trying to “solidify its position in the Black Sea and Eastern Europe.” At the same time, they see the Empire instrumentalizing Turkey as a mere ‘frontline’ in a larger war, with NATO’s strategy to ‘besiege’ Russia and China also being applied against Turkey.

So “the fear of Turkey is now as strong as the fear of Russia and China.”

They seem to understand that if War Inc. gets what it desperately wants, “the Black Sea will be transformed into the Eastern Mediterranean. The US and Europe fully settling into the Black Sea means they will never leave.” That “could lead to Turkey’s destruction in the medium and long term.”

And then there’s the crucial twist: “Ukraine cannot stop Russia. But Turkey can.” That is exactly what Erdogan is playing at. “The US and Europe must be thwarted from settling into the Black Sea. Turkey-Russia relations must be preserved.” The problem is how “Ukraine’s integrity and defense must be supported.”

All of the above perfectly ties in with Erdogan, back from Kiev with all rhetorical guns blazing, blasting that the West wants to “worsen” the Ukrainian crisis. Erdogan media frames it as “a game is being set to drive Turkey against Russia.”

Erdogan so far never really challenged the ‘rules-based international order.’ He always made a point of addressing two different messages to East and West. To Asia, the emphasis was on anti-imperialism, the dire consequences of colonialism, the Israeli apartheid state and western Islamophobia. To the West, he impressed his own version of dialogue of civilizations (and was branded as “an autocrat”).

Ultimately Erdogan is not west-toxified, much to the contrary. He sees the US-led order as a neocolonial power only interested in pillaging the resources of the lands of Islam. Of course he’s handicapped culturally – adhering, at best, to memorizing Quranic verses, listening to Ottoman military music and having his photo taken with the odd Turkish pop star. He doesn’t read; it’s all about instinct.

A conversation about Erdoganian neo-Ottomanism in Istanbul’s Grand Bazaar beats any think tank analysis. Bazaaris tell us it’s something in constant flux. In foreign policy terms, it migrated from pro-EU to frustration for being excluded, coupled with the certainty that Turkey is fed up with being a US client state. It’s as if Erdogan, instinctively, has grasped the collective west’s current, abysmal strategic debacle – thus his effort, now, to build some strategic cooperation with Russia-China.

Has he undergone a conversion though? Considering his legendary volatility, all bets are off. Erdogan has a long memory, and has not forgotten that Putin was the first world leader to condemn the – botched – 2016 coup attempt by the usual intel suspects, and support him personally.

It’s still a long way for Erdogan’s Turkey to become a strategic partner to Russia. Yet he has a knack of knowing which way the geopolitical winds are blowing – and that points to Eurasia integration, the Russian-conceptualized Greater Eurasia Partnership, and the primacy of the Russia-China strategic partnership manifested through BRI, EAEU and the SCO.

There’s even an Eurasianist mini-boom in Turkey. They are secular; anti-NATO – just like Russia-China; consider the Empire as the undisputed troublemaker in West Asia; and want closer ties with Moscow and Tehran.

In Nostalgia for the Empire: The Politics of Neo-Ottomanism, M. Hakan Yavuz argues that “neo-Ottomanism constitutes a web of interrelationships between the dominant discourse of Islamism, the residual memories of Ottoman grandeur, and the prominent desire to reconstitute the Turkish nation as a regional power with historic roots.”

The money quote is “regional power”. Why not a strong “regional power” deeply integrated into a strong Greater Eurasia – instead of a mere (decaying) western vassal? No wonder Erdogan is dying to hang out with Putin in Ankara.